Tenth place out of eleven. He was devastated. I could barely get him to even look at me. He had worked so hard on his pinewood derby car, designing it, sanding it, painting it, and carefully putting on what he was sure would be winning numbers. I don’t remember him ever working so hard on something. He displayed it proudly on our kitchen window sill for a week before the derby, sure that he had a winner.

He asked me to come that night to watch him race while Dennis stayed home with Mila and put her to bed. I was flattered that he wanted only me there. Camden had won the derby last year, so the pressure was as high as it gets for a cub scout racing a rickety block of wood on wheels.

And then he lost over and over and over again. With each round, I could see his face becoming more and more dejected. I learned early on in his life that when he’s disappointed, he becomes angry and withdrawn. I wrapped my arm around his shoulder as he stomped angrily out of the church building, tightly gripping his losing car. He slammed the van door and angrily turned his back towards me.

“I’m so sorry, bud. I know you’re disappointed. How about we commiserate together? Let’s stop at the gas station and get some hot chocolate.” 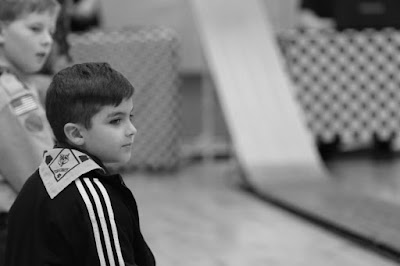 Slowly he started talking. How he wasn’t sure where he had gone wrong. What he’d do differently next year. How humiliated he felt. How he didn’t know how he would tell his brother that he had lost. Mostly, I just listened.

That night as he went to bed, he gave me a long hug and looked at me for a long moment with those huge, beautiful, green eyes that melt women into puddles.

“Thanks for everything, Mom. Thanks for coming to watch me, even though I lost.” And then the rare unsolicited, “I love you.”

How I adore that little boy.

He gave me another long hug and I thought my heart was going to explode with tenderness for my sometimes-prickly little boy.

I thought of the past year and how it’s brought me literally to my knees, time and time again. I’ve experienced more discouragement and frustration than I can ever remember experiencing in my life. And yet I think of how grateful I am for what it has done for my relationship with my own heavenly parent. My heart has come closer to God than it ever would have ever otherwise. And what I’ve discovered has changed me. I feel such tenderness for this person that I know is there but have never seen with my mortal eyes. This Father who weeps with me when I weep, and rejoices with me when I succeed. I wouldn’t change this past year of hardship for a hundred years of ease.

Maybe, like with Luke, losing over and over again had really been better for me than winning.

I’ve never been one to ask for prayers, but they would be appreciated now. Very, very soon our little girl will be in our arms. At any given moment of the day I’m vacillating somewhere between exuberant anticipation and overwhelming nervousness. I think of the grief she will experience when she leaves her country and friends, and I want to weep. It will probably be one of the hardest things she will ever go through in her life. As we approach the finish line I realize that, really, it’s just the beginning.